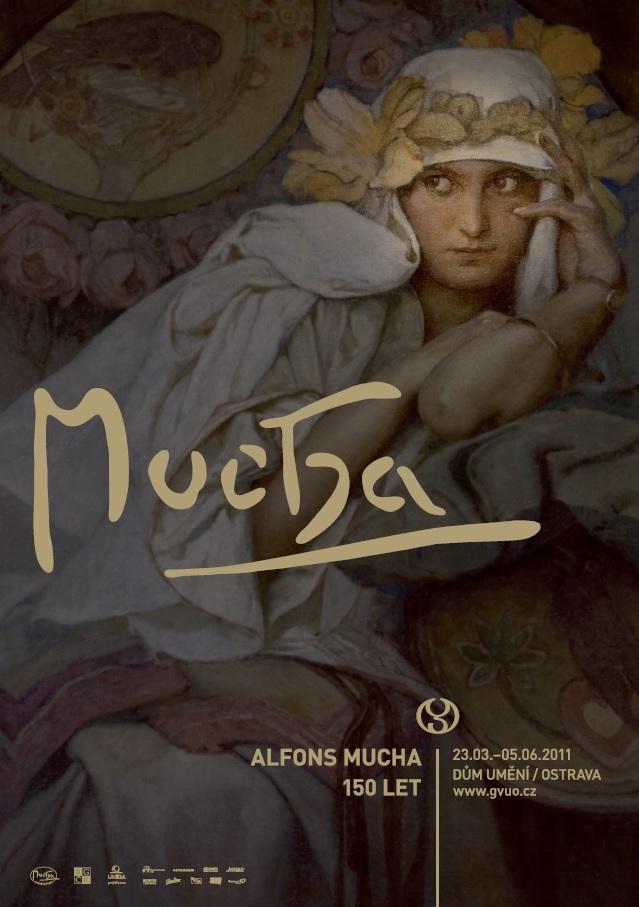 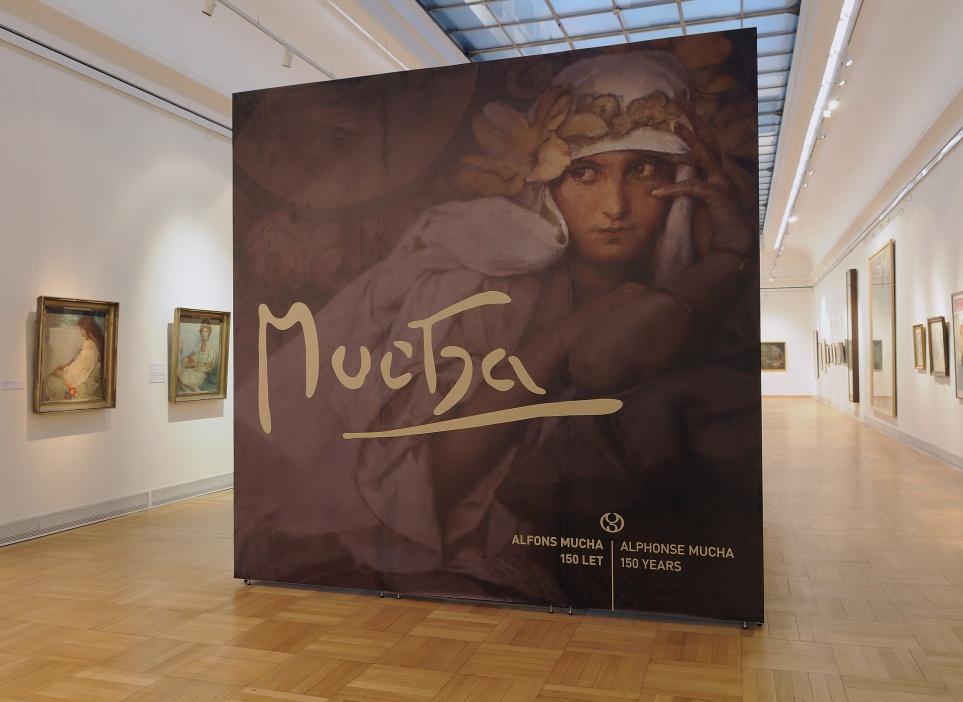 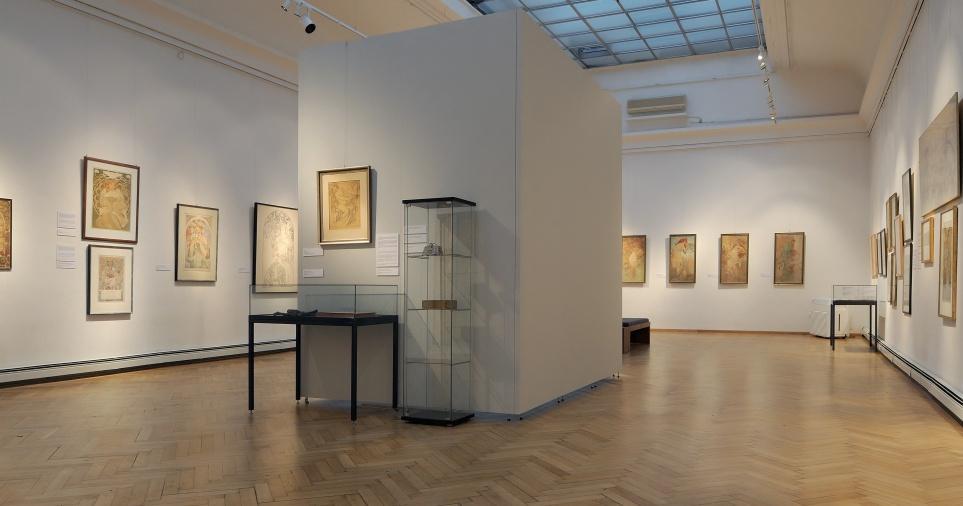 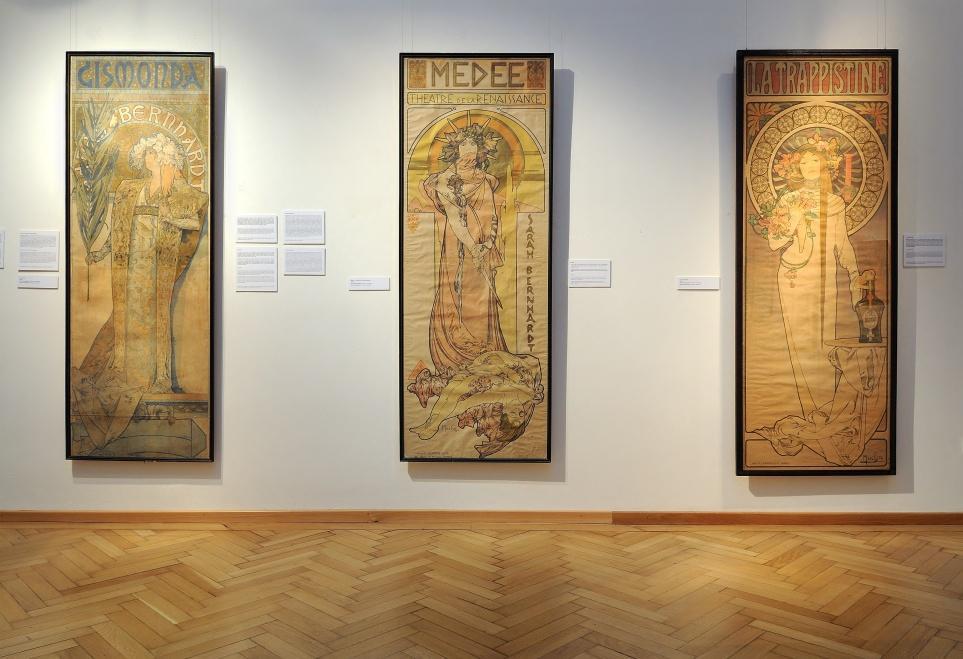 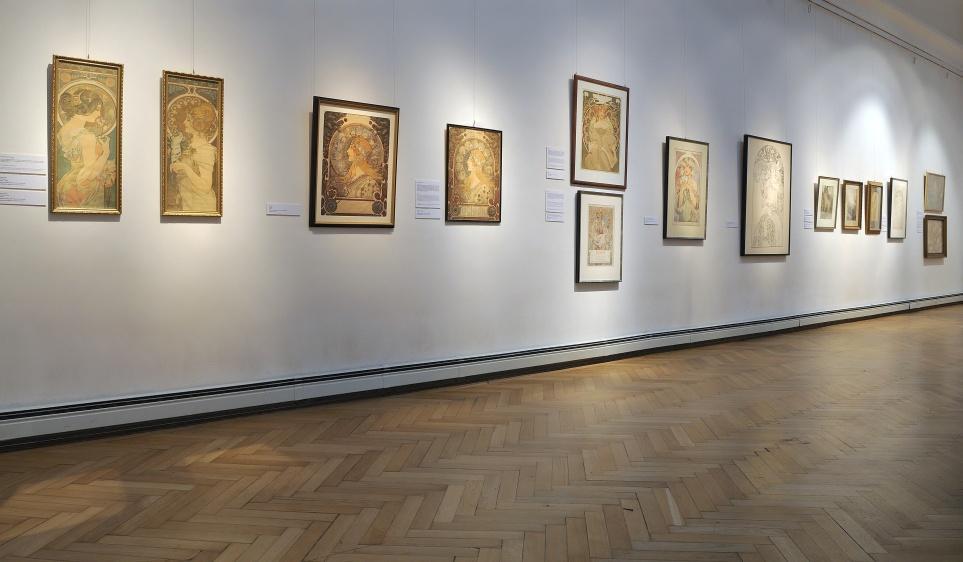 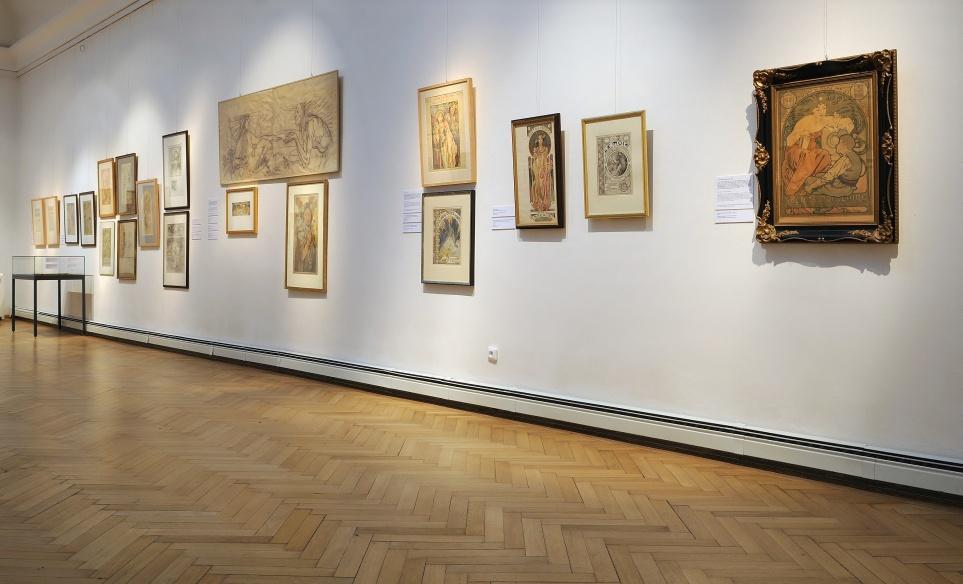 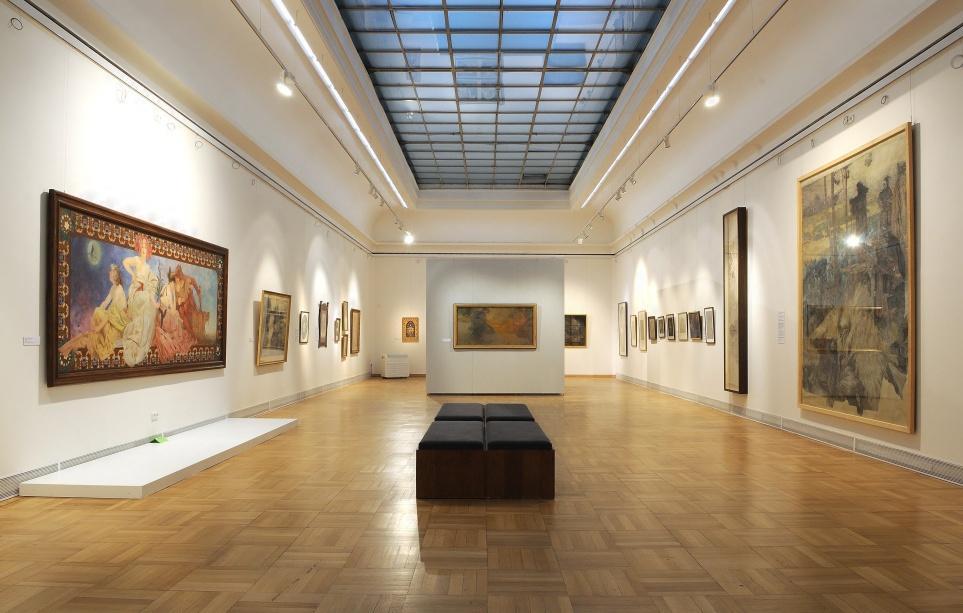 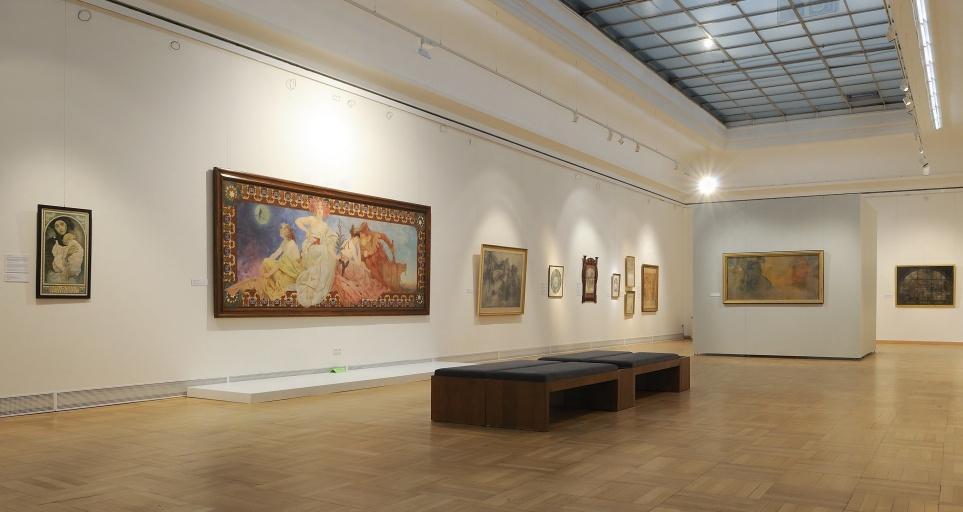 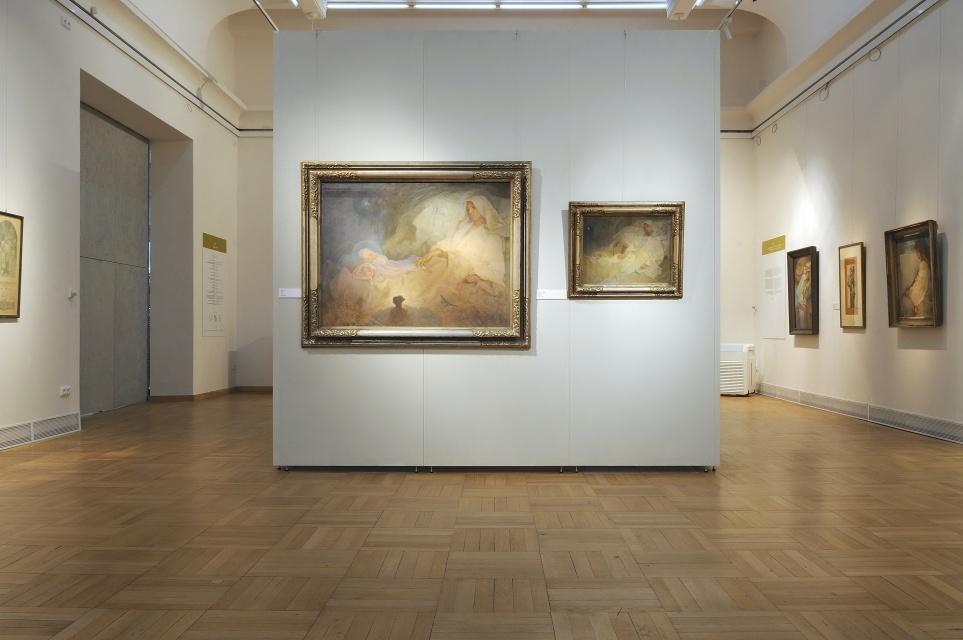 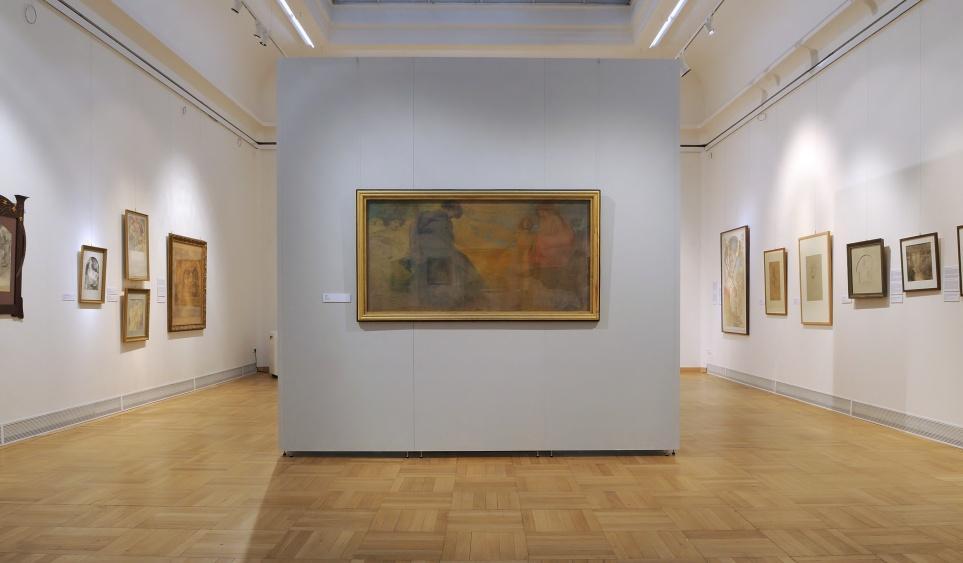 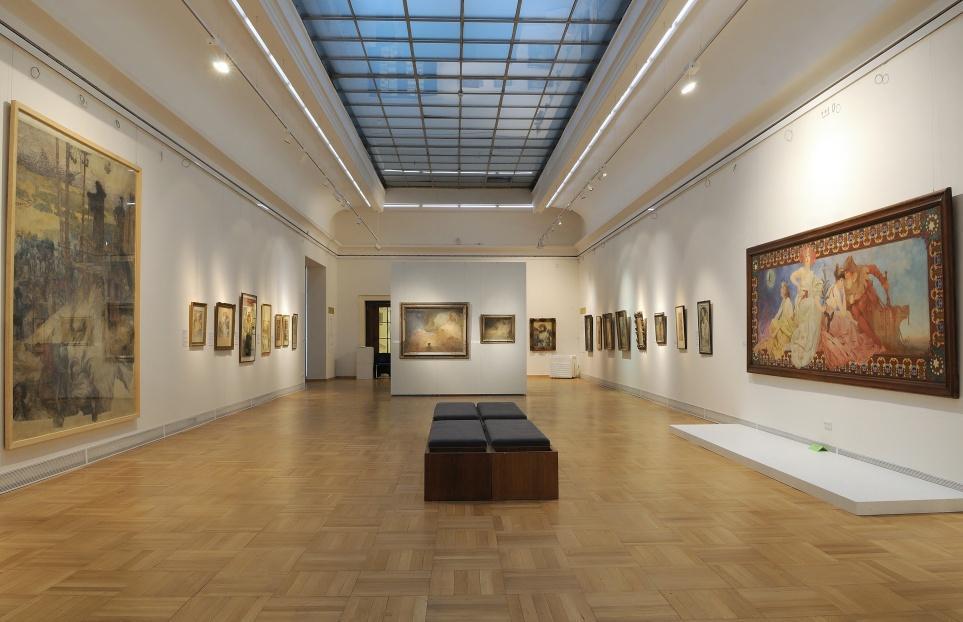 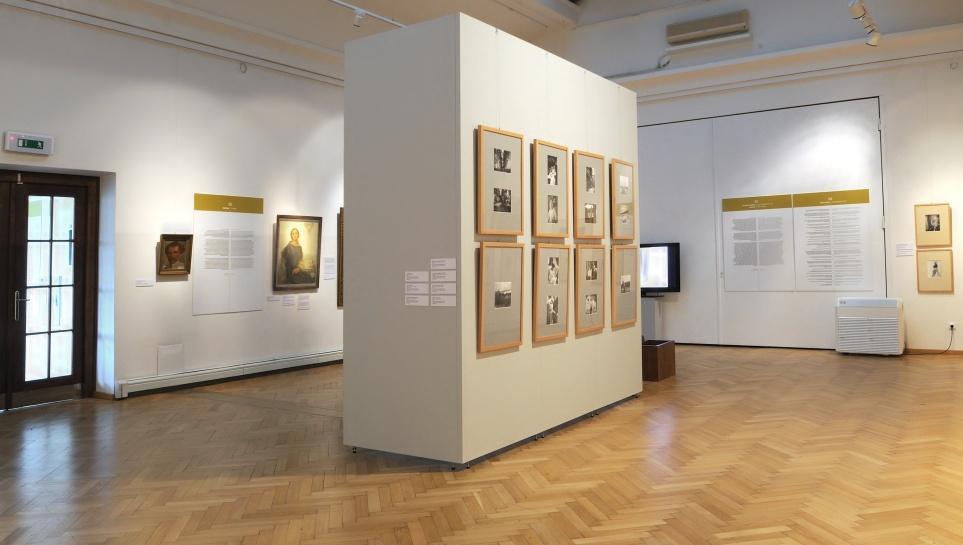 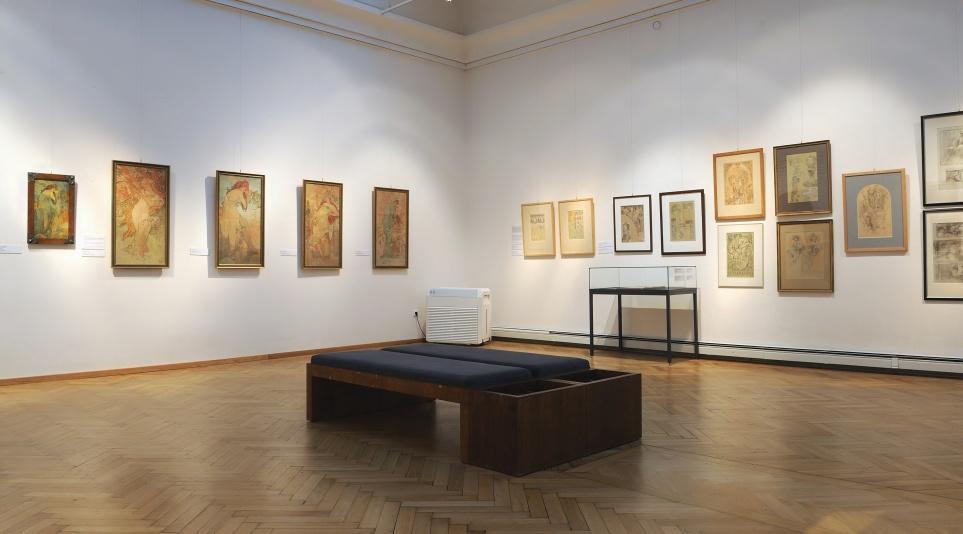 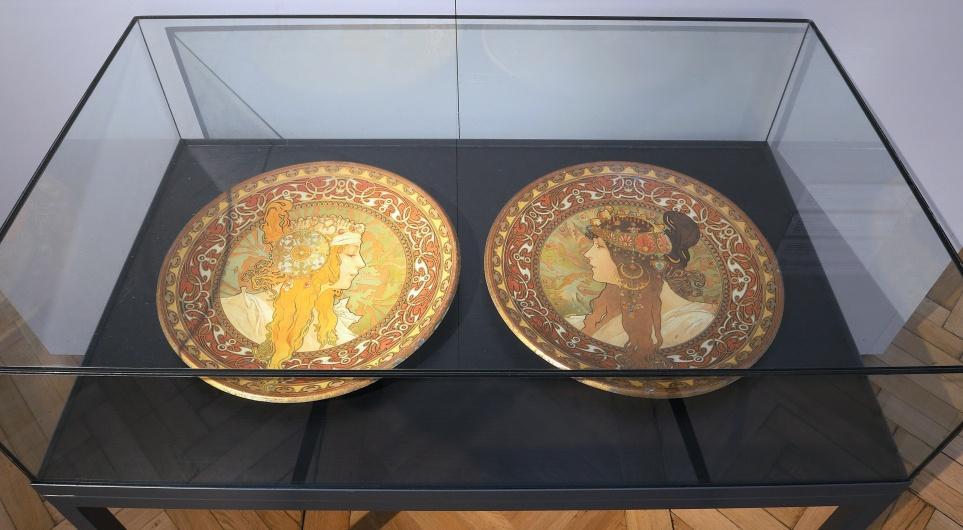 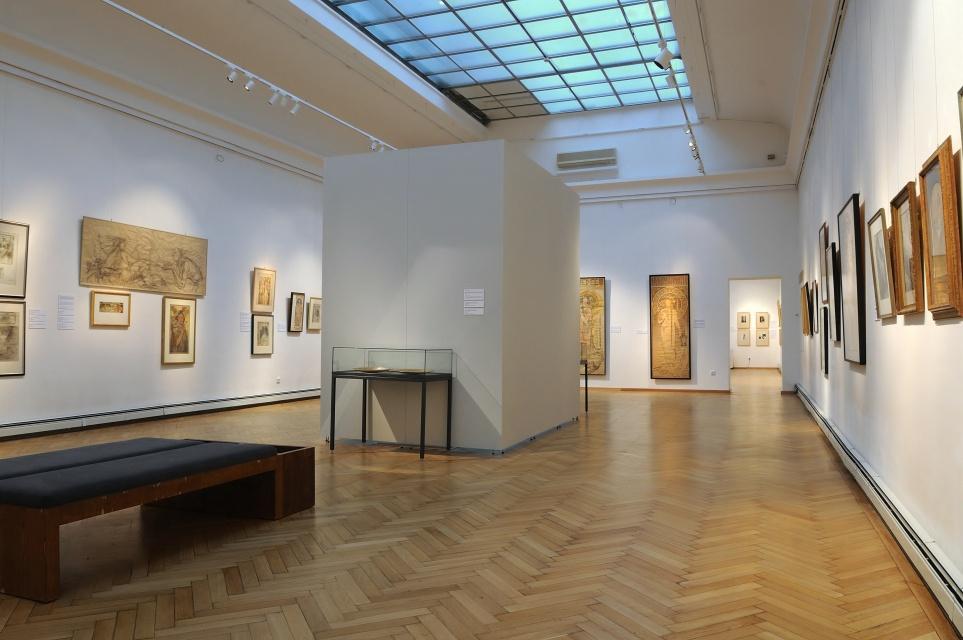 23. 3. – 5. 6. 2011
The exhibition is taking place under the patronage of Ing. Jaroslav Palas, president of the Moravian-Silesian Region and Ing. Simona Piperková, Councillor of Ostrava City.
The exhibition is supported by the Statutory City of Ostrava.

Alphonse María Mucha was born on 24 July 1860 in Ivančice, a small South-Moravian town in what is now the Czech Republic. His homeland had been under the dominance of Hapsburgs from the 16th century, and when Mucha was 7 years old, Czech people became part of the dualistic Austrian-Hungarian Empire. Although Czech claims to the cultural and political independence had been ignored by Austria, patriotic movement was expanding.
Mucha grew up in the period of tense political atmosphere that partly culminated by a growing national consciousness. In 1862, a very influential sports and political society called Sokol was established and Mucha was later involved in its activities through his work. In Ivančice, as well as in other Czech towns, patriotic organisations had been continuously created. Young Mucha could thus have used his talent in taking part in the organization of various political activities: he designed posters, leaflets and he decorated the stands. Patriotism (love for homeland) signified innate spiritual power for Mucha. It was a power that drove his life and artistic career further. This sense had gradually evolved in a distinctive pacifistic philosophy, which inspired Mucha in creating his Slav Epic (1911–1928).  This work represents his gift to the nation as well as a monument of Slavs and humanity. During his long-term soujourns away from the Czech lands, it was particularly his family in Ivančice that had preserved the artist’s spiritual bonds with his beloved homeland.
This section introduces portraits of Mucha’s family, including his younger sisters Anděla and Anna, his wife Maruška, who had always been his source of inspiration as well as his artistic colleague, and their children Jaroslav and Jiří. As a student of art in Munich and Paris, Mucha carried on in his production of designs for Krokodíl, a patriotic journal in Ivančice established by his brother-in-law Filip Kunr. In his drawing Memories of Ivančice, the town is depicted as an embodiment of heartfelt memories of his youth. Mucha’s photographs, taken when he had been working on Slav Epic, also capture family bonds and love that allowed him to achieve his artistic success.

THEATRE AND ADVERTISING POSTERS
After many years devoted to illustration in Paris, Mucha’s career registered a dramatic reversal. His poster Gismonda (1894), designed for Sarah Bernhardt, became a sensation straight after its display in Paris in the New Year of 1895. Parisians, used to seeing posters by Chéret or Toulouse-Lautrec, were fascinated by Mucha’s innovative design. Mucha managed to lively depict on an unusually elongated format of the poster the stage image of ‘divine Sarah’ as was her public perception. Realistic depiction of an actress as an elegant woman with flowers in her hair, dressed in an elaborately executed luxurious costume, together with exotic byzantine motifs in the background, all these were very attractive aesthetic elements that had become characteristic for Mucha’s posters and other graphic works from 1896. The style, which the Parisians termed le style Mucha, made the artist one of the most famous masters of Art Nouveau.
Sarah Bernhardt, fascinated by his art, offered Mucha a contract and made him her personal graphic artist and artistic advisor. Mucha represented the most popular talent on the Paris art scene, whose work had been sought-after by leading publishers, printers and gallery owners.
In 1896, he signed a contract with Champenois, a company which owned one of the biggest printing drums in France. Between 1896 and 1904, most of Mucha’s Art Nouveau posters were printed there, as well as his purely decorative panels, the so-called panó. Shortly after this period, Mucha started to use his designs to decorate various objects of applied arts, such as furniture and even architecture. Mucha’s splendid and financially accessible art appeared in homes of ordinary people who could thus have enjoyed his work, too.

HARMONIC BEAUTY
By the end of the 1890’s, Mucha’s work was known all over the world and his name was connected with the major art trend of the time – Art Nouveau. His artistic strength was significant for its aesthetic charm. Beautiful women with richly decorated details in the background brought about clear and universal message: glorification of Beauty. For Mucha, beauty symbolised ‘moral harmony’ visualised in the material world. The role of the artist lay, according to Mucha, in transmitting this message to others through emotions that the power of art stirs. Mucha’s distinctive graphical style (le style Mucha) stood for exactly such tool which was to enchant the beholder and simultaneously represent a visual language, a means of communication.
This section illustrates the pattern of Mucha’s style which emerged from a conviction that the true design should in fact be a feast for eyes. Within his strategy, Mucha used the so-called golden section, format to composition ratio (2:3 or 3:2), harmonious colour contrast, opposition of forms and ornamental elements such as auras and arcs. The ideal composition was represented by the so-called Q formula, which is a term used for the first time by a British art historian Brian Reade. Posters such as Slavie Insurance Company (1907), Clio (1900) and Mucha Studio (1897) demonstrate that Mucha very often placed a woman figure – the central subject of his composition – asymmetrically in the aura circle. Both elements create a form in the shape of a letter Q, which has been identified as one of the most distinctive features of Mucha’s style.

APOTHEOSIS OF HOMELAND AND SLAVONIC PATRIOTISM

In 1910 Mucha returned home in order to fulfil his boyhood vision and to support his homeland through art. During the last decade, he expanded on his idea of an epic work that would reveal joys and grief from the Slavic history. He believed that in order to achieve political independence, Czech people would have to cooperate with their brothers Slavs; that was the reason for his attempts for spiritual closeness attained by means of sharing historical experience. Between the years 1911 and 1926, Mucha worked on his Slav Epic which incorporates twenty monumental canvases depicting key episodes from Czech and Slavic history.
The creation of Slav Epic chronologically corresponds to several key events of the 20th century. The outset of WWI in 1914 plunged Europe into chaos. The result was the break-up of Austria-Hungary and the formation of Czechoslovakia, Mucha’s new homeland, and other independent Slavic countries. Mucha’s dream thus came true and his vision achieved its climax with the last canvas of the cycle, Apotheosis of the Slavs: Slavs for Humanity (1926). This painting celebrates the victorious apotheosis of the Slavs, the achievement of political independence in 1918. However, Mucha had one more wish. He set a collective objective for the Slavs: permanent unity and attempts to maintain peace and humanity. This is where the subheading originated: Slavs for Humanity.
After his return to the country, Mucha began to work on the decoration of the Municipal House (1910-1911). This section contains sketches for Slav Epic, drawings and paintings on the following topics: war, sense of belonging, faith and universal love.
Alphonse Mucha became a prolific and versatile artist during his artistic career that lasted for over half a century. His artistic legacy includes the famous Art Nouveau posters, a masterpiece Slav Epic (1911 – 1928) and a range of other commissions created for the newly established Czechoslovak Republic. Although he worked with various media and genres, be it ‘high’ or ‘popular’ art, his main motive was to evoke love and sense of belonging. As one of the founders of modern propaganda art, Mucha developed a rich visual language now known as le style Mucha. He also invented a new form of art, panó, which were ornamental panels available to wider public. His work, either commercial advertisements or ornamental panels, has always been enriched by his passion for communicating with people and affection towards the world around him.
Mucha believed that the main aim of art is to create beauty, which he defined as harmony between spirit and body, between inner and outer world. He was convinced that good art is strong enough to inspire and connect people with the same ideals, such as peace and natural evolution of mankind. During his artistic effort Mucha’s love for life transformed into a universal love for homeland, Slavic brothers and a sense of belonging of the whole mankind. Mucha’s Slav Epic as well as other works that he created during his stay in Paris reflects this process of spiritual development.
The exhibition of Alphonse Mucha’s works in the House of Arts in Ostrava is presented for the very first time. There are nearly 170 works exhibited in four thematic sections, including oil canvases, drawings, graphic works as well as practically 60 photographs. Such an extensive range of prints from the original glass panels has never been presented by any Czech gallery. In addition, a preparatory drawing for the painting No. 11 from the cycle Slav Epic, ‘The Meeting at Křížky’ (293 x 262 cm) is a rarity of the exhibition that is now displayed in Ostrava in its world premiere. Another painting, which we would like to draw your attention to, is a work called ‘Allegory of Dramatic Arts’ (1890), which has been permanently displayed in Mucha’s native Ivančice. Due to its dimension (407 x 168 cm), the work has been exhibited in the Czech Republic only for the second time. The Gallery of Fine Arts in Ostrava has also managed to acquire a unique loan for the current exhibition from a private owner: Mucha’s complete sample book of Art Nouveau motifs entitled ‘Documents décoratifs’ (1902).  Visitors will be able to examine this work in detail in a digital form. The collection of the Gallery of Fine Arts in Ostrava includes six works by Alphonse Mucha, ‘Girl with flowers’ (1935) being the most famous piece. Other works displayed at the exhibition have been acquired from other gallery and museum collections and from Czech and international private collectors. The main partner of this unique cultural event is ‘Mucha Foundation’ that administers Alphonse Mucha’s inheritance. We would like to express our thankfulness to John Mucha, Alphonse Mucha’s grandson, whose generosity and active participation allowed for this significant project taking place in Ostrava to happen.

Organizers thank John Mucha the grandson of Alphonse Mucha without him it couldn´t realize this exhibition.