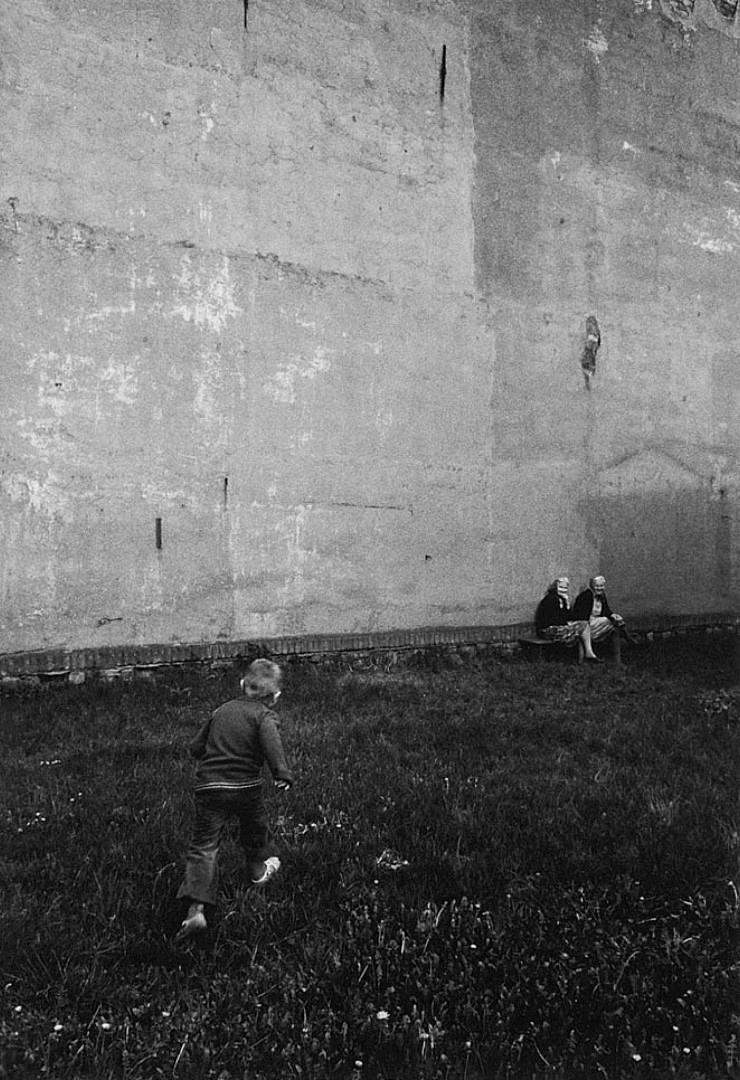 His photograph Running Boy of 1978 shows a boy running with his back to the camera. He runs towards a bench on which two elderly women in headscarves are seated. The entire scene takes place in front of a long and high concrete wall. It is blank wall bereft of any signs and it evokes a sense of impenetrable hopelessness. The wall severely demarcates the entire space. There is a palpable contrast between the grey, almost endless concrete and the grass. The generational confrontation in the shape of the boy and the old women is a divergent element that disrupts the wall’s domination. The boy is a symbol, dynamically bound for a future that no one knows but onto which everyone projects their own visions, ideas and plans.

Viktor Kolář was born in Ostrava, where his father was the owner of a photographic studio and shop. Viktor attended the city’s Photographic Institute. In 1968 he emigrated to Canada where he was able to devote himself to photography thanks to a scholarship. He remained abroad until 1973, when he returned to his home country and Ostrava. He worked in several occupations and often photographed his native city in his spare time. In the mid-1980s he received official permission to work as a photographer. Since 1994 he has taught in Prague at the Film and Television Faculty of the Academy of Performing Arts, where he was appointed senior lecturer in 2000. His oeuvre centres on the urban scenery of Ostrava, which he depicts without sentimentality or embellishment. The harsh conditions of neo-Stalinism in Ostrava that Kolař discovered on his return from Canada were augmented by the unique backdrop of heavy industry, distressing human stories and disillusionment, and he was able to capture it all masterfully in his photography.