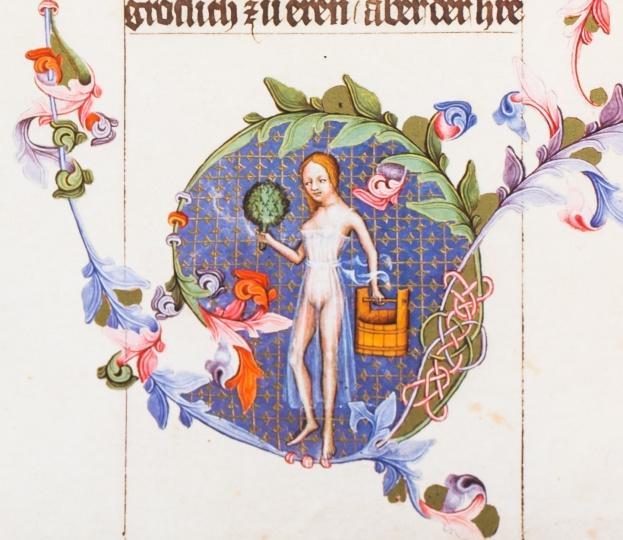 Female barber-surgeons in art during the reign of Wenceslas IV

Female barber-surgeons in art during the reign of Wenceslas IV

Wenceslas IV, King of Bohemia and King of the Romans, owned one of the largest private libraries in Central Europe. Some of the unique manuscripts feature beautiful ornamentation which still fascinates experts today. Possibly the most common decorative motifs in the King’s manuscripts are depictions of female barber-surgeons – scantily clothed young women shown alongside the tools of their trade (buckets and towels), who are often depicted in the ornamental parts of the pages as equal in status to the King himself. When a female barber-surgeon is depicted alongside the King, she is often portrayed in the manner of his second wife, Sophia of Bavaria. These figures are imbued with a rich symbolism. Most frequently they are associated with purification, renewal or rebirth. They are also interpreted as doubles of Venus, though in some cases they are personifications of the “obedient people”. This lecture uncovers the mysterious world of these female barber-surgeons – figures who played an important role not only in Wenceslas IV’s manuscripts, but also in the wider society of the time.

Only in czech, free entrance.