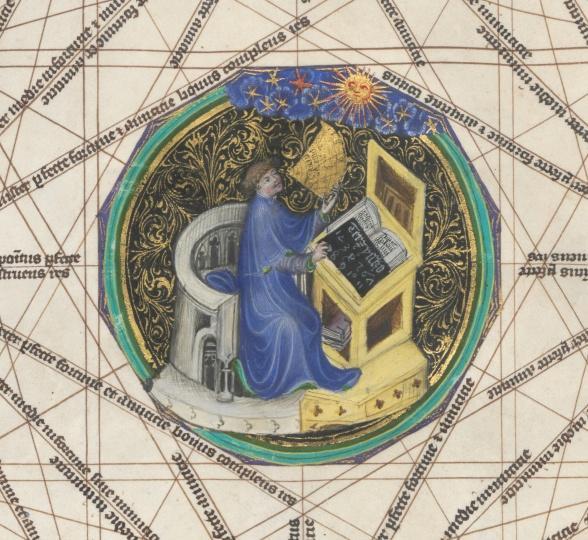 Astronomical and astrological manuscripts from the reign of Wenceslas IV

Astronomical and astrological manuscripts from the reign of Wenceslas IV

Monarchs in the High and Late Middle Ages often took a keen interest in astronomy and astrology – and the Kingdom of Bohemia was no exception. Of the Bohemian Kings from the House of Luxembourg, the most prominent student of these fields was Wenceslas IV – as demonstrated by three surviving manuscripts from his personal library. Two of these astronomical/astrological manuscripts are now held by the Austrian National Library in Vienna. The first is known as the Vienna Astronomical-Astrological Compendium, and the second is the Quadripartitus of Ptolemy. The least-known is the third manuscript – the Munich Astronomical-Astrological Compendium, held by the Bavarian State Library in Munich. The two compendiums are of interest both for their texts and for their artistic ornamentation. They are decorated with symbols typically associated with Wenceslas IV – who was undoubtedly interested not only in the artistic aspects of the manuscripts, but also in the texts themselves. This lecture presents all three manuscripts in words and images.

Only in Czech, free entrance.

JACQUES CALLOT / Mirror of the world

Red and blue – the colours of love, the sky, and much more

The House of Arts, Ostrava
More
© 2017 Galerie výtvarného umění v Ostravě
Designed by burgrova.tumblr.com     Developed by Ollero
Connection lost.
The requested page does not exist
An error occurred on the server.
An error occurred while parsing data.
The request timeout has expired
Request was interrupted.
The minimum possible value is
The maximum possible value is
You are using a browser in a mode that does not support storage in Local Storage. Some application features may be inaccessible.
An unexpected error occurred while processing the order. Please try sending your order again later.
Failed to copy link.
The link has been copied to the clipboard. Copied link