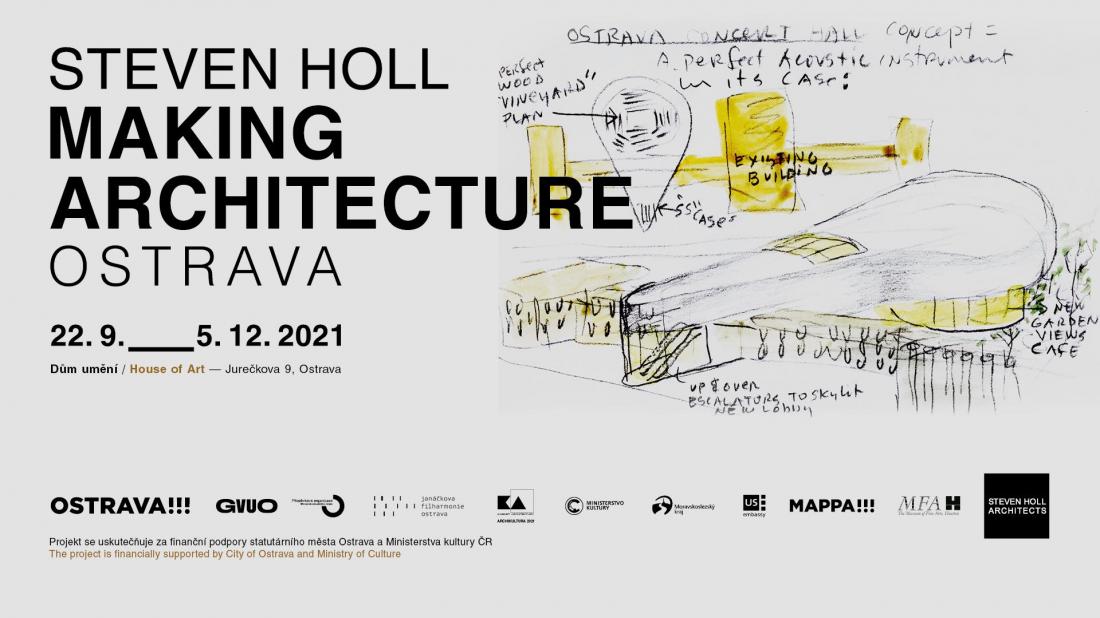 Design of a new concert hall building in Ostrava

Design of a new concert hall building in Ostrava

View of the Institute for Contemporary Art at VCU Belvidere Street entrance at dusk, watercolour

View of the Institute for Contemporary Art at VCU Garden at dusk, photo Iwan Baan

REACH Campus with Video Wall from Terrace at Dusk, watercolour

22. 9. – 5. 12. 2021
The patrons of the exhibition are Tomáš Macura, Mayor of the City of Ostrava, Lubomír Zaorálek, Minister of Cultury, Ivo Vondrák, President of Moravian-Silesian Region and the U.S. Embassy in Prague.
The patron of the Gallery of Fine Arts in Ostrava is Lukáš Curylo, Deputy Governor of the Moravian-Silesian Region.
The project is financially supported by the City of Ostrava and Czech Ministry of Culture.

Opening will take place on Tuesday 21 September 2021 at 5 p.m. Opening will be streamed live on  Facebook and YouTube GVUO.

The travelling exhibition presents 11 completed projects by the world-famous American architect Steven Holl. It was prepared by the Steven Myron Hall Foundation and curated by Nina Stritzler-Levine. As part of the European tour, the exhibition also includes a twelfth project (now in the preparatory phase): a concert hall in Ostrava.
The exhibition reveals the intricate and distinctive process of creating these projects, which the exhibition presents from the first watercolour sketches through the building designs to their models. Through photographs, it also reveals the process of construction, including media responses and author's comments.
You will learn about the Museum of Fine Arts in Houston, the Jin-Pao-San Necropolis in Taiwan, a library in Malawi, and the Cancer Care Centre in London, among others.
The exhibition project is held in cooperation with the Statutory City of Ostrava, the Cabinet of Architecture, and Janáček Philharmonic Ostrava.

STEVEN HOLL (born December 9, 1947 in Bremerton, Washington) is an American architect whose buildings reflect a fascination with scientific phenomena and the play with light. Steven Holl studied at the University of Washington in Rome and at the Architectural Association in London (1976). He began his career in California and opened his own office in New York in 1976. He taught at the University of Washington in Rome, Syracuse University in New York, and since 1981 has been teaching at Columbia University in New York. In 1998, he was awarded the prestigious Alvar Aalto Medal. In 2000, Holl was elected to the American Academy of Arts and Letters. In July 2001, he was named America's Best Architect by Time magazine for "buildings that pleases the spirit and the eye." Other awards and honors include the 1986 best New York Architectural Design Award for The Pace Collection showroom from the American Institute of Architects (AIA), Medal of Honor from the New York American Institute of Architects (1997), the French Grande Médaille d'Or (2001), and the Smithsonian Institution's Cooper-Hewitt National Design Award for Architecture (2002). He is an Honorary Fellow of the Royal Institute of British Architects / RIBA (2003) and the recipient of Arnold W. Brunner Memorial Prize in Architecture that is awarded by the American Academy of Arts and Letters, and the 2008 BBVA Foundation Frontiers of Knowledges Award in the Arts. In 2007, Steven Holl Architects received the AIA Institute Honor Award, and the AIA New York Chapter Architecture Award of Merit and Building West Award for the School of Art and Art History (University of Iowa), Higgins Hall Insertion in Pratt Institute (Brooklyn, New York) and New Residence. At the Swiss Embassy, he received the 2007 AIA New York Chapter Architecture Honor Award. In 2010, the Herning Centre of the Arts in Denmark designed by Hall was awarded the RIBA International Award. The horizontal skyscraper, the Vanke Centre, received the 2011 AIA Institute National Award and the AIA NY Honor Award. In 2011, he was named an Associate Professor by the Council on Development in Design and was the 2012 AIA Gold Metal recipient. In 2014, he received the Praemium Imperiale Award for Architecture. In 2016, he was named the recipient of the Daylight and Building Component Award for his work with light in architecture.