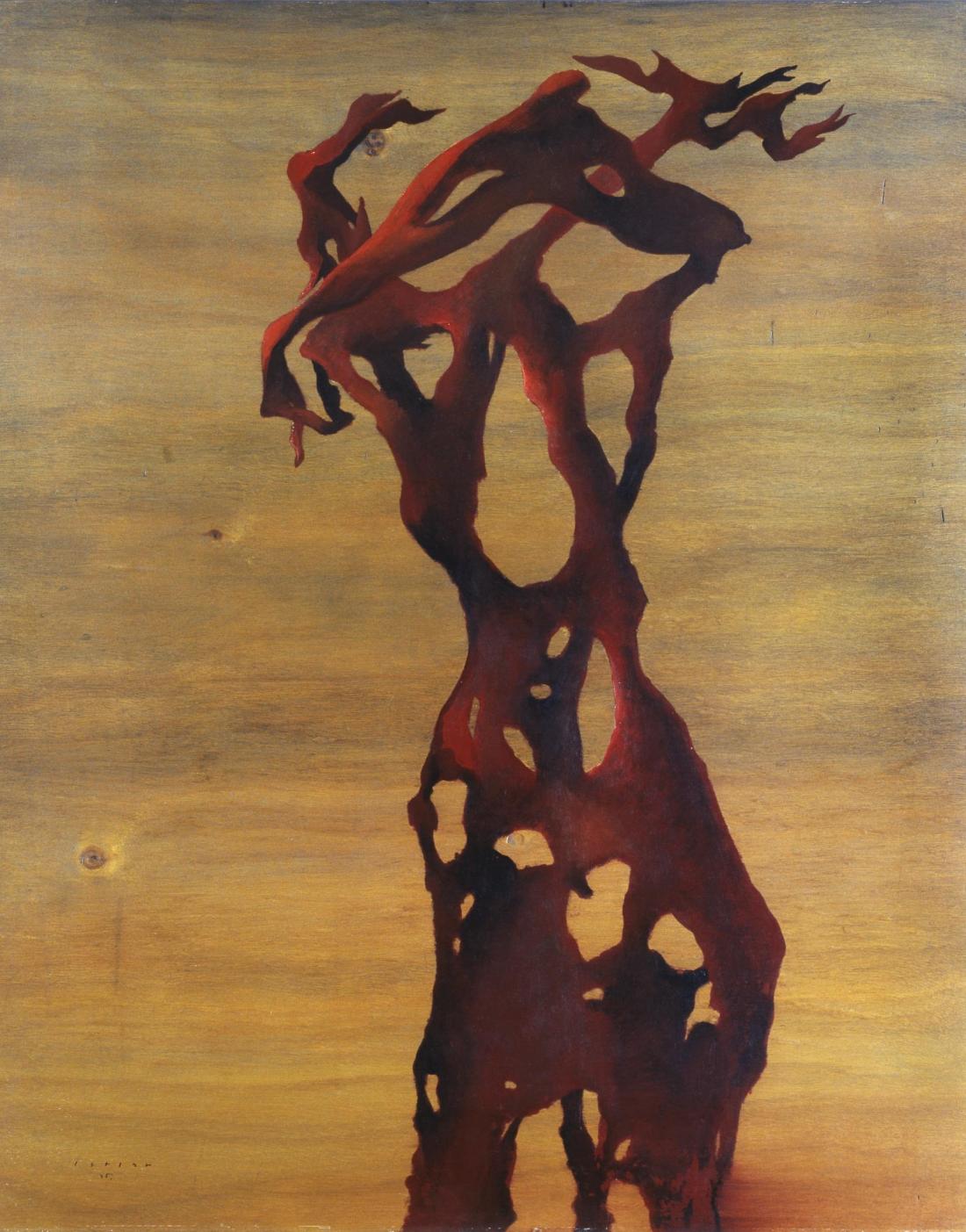 This spring, at the time of coronavirus isolation when our institution was closed, we decided to establish internet contacts with the public organizing a contest for the most impressive original musical composition inspired by a work of art. We chose an oil painting entitled Figure by Josef Istler, an important Czech surrealist. The painting dates from 1945 and is part of the GVUO collections.
The participants, divided into two age categories, were asked to send their own musical composition for any instrumental cast or just a solo instrument as a digital audio recording in the range of 3-5 minutes drawing inspiration from this work. They were also invited to send videos shot while interpreting their own piece. It has been a success. We therefore decided to present all contest recordings at a separate exhibition.
The virtual project has thus materialized into an exhibition. In the installation, the spectator / listener can either just listen to an audio recording and at the same time enjoy Istler's oil painting, or watch independently the interpretive video recordings of the contestants including, of course, the sound.

The winner was chosen by an expert jury consisting of Milan Bátor, a music theorist, critic and pedagogue, Jan Šrubař, a conductor and pedagogue, and Gabriela Stašová, a music publicist, based on the evaluation of anonymous audio recordings.

It is a variable punctual composition working with contrasts and surprising intrusions. The work is musically interesting and impressive, inspiring to think.

A successful work with the above mentioned topic using the principle of fugue, variable combination of motifs, contrasting surfaces, a musically impressive processing testifying a well-thought-out way of authorial work.

In the music contest organized by GVUO, basically nothing surprised me. Given the surrealism and avant-garde of the work of art, I did not assume that anyone could try a schematic and kitschy work. The recordings that have arrived attempt both a purely instrumental modern and a noise to drone electronic composition that can resemble the contemporary Nordic raw ambient music, often following the darkest genres, including the use of samples and sounds "from elsewhere". While organ and piano compositions communicate us a gradually exhibited plot, the mentioned electronic pieces work with surface and space and sometimes repetitive fragments. It's hard to say what's more valuable - a composition written in notes, or an atmospheric sound surface full of references and nuances reaching to the darkness of light which is also conveyed by the image? We may have decided relatively uniformly, but the necessary diversity of art was also reflected in this contest, which I consider to be positive.

JOSEF ISTLER
(21. 12. 1919, Prague – 19. 6. 2000, Prague)
Painter, autodidact. Between the years 1938–1939, he also studied under the guidance of the German painter Walter Höfner in ex Yugoslavia. He is one of the important Czech surrealist artists of the second generation. The period from the 1940s to the 1960s can be considered as the fundamental core of his work. Islter was primarily influenced by the work of two of our most important surrealists, i.e. Štyrský and Toyen, but also the circle of artists around Václav Zykmund and his Ra edition were essential for his work. Istler was a member of the Hollar Association of Czech Graphic Artists (SČUG). From 1942, he was a member of the Ra Group and from 1945 of the Mánes Union of Fine Arts (Prague). He was also active in the international surrealist group COBRA (founded in 1947), and in the 1960s in the Phases group. Josef Istler had his first solo exhibition in Brno already in 1946. Throughout his artistic life, Istler's work was influenced by the imaginativeness of surrealism, but also by the abstraction of the Klee type. In the 1960s, he deviated from Effenberger's surrealist circle and maintained contacts with the circle of Mikuláš Medek and Vladimír Boudník. This abstract period can be included in the Czech Informalism stream.

FIGURE, 1945, oil, plywood, 89x118 cm
The highly stylized, abstracted human figure reflects the terrifying character of the wartime. This form can also be perceived within the surrealist optics as a more general phenomenon of disintegration and insignificance of the bodily matter in which the spirit resides. The body as a transient box, as a temporary form. Perceived by the prism of the wartime, the associations of the decay of humanity and humanism spring up. All that remains is an emptied, war-torn and wounded structure. The image can thus be perceived as a more general existential sign, but also as a contemporary iconographic gloss. It bears typical elements of surrealistic morphology, an indefinite dreamy and quiet background in which an inhuman, anatomically indifferent shape is embedded.