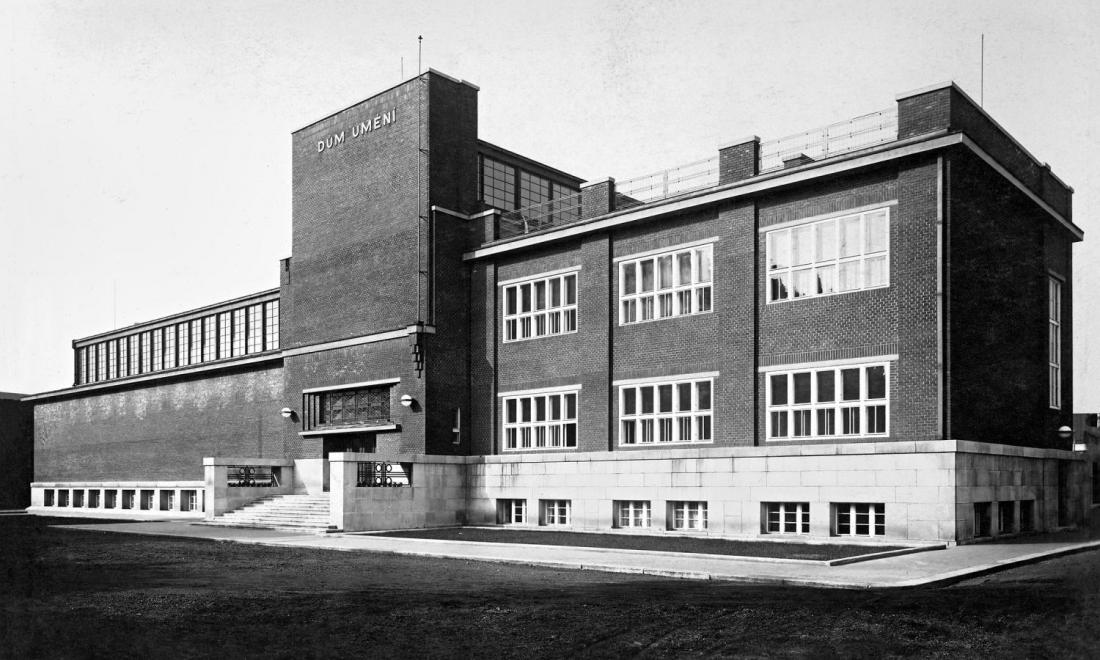 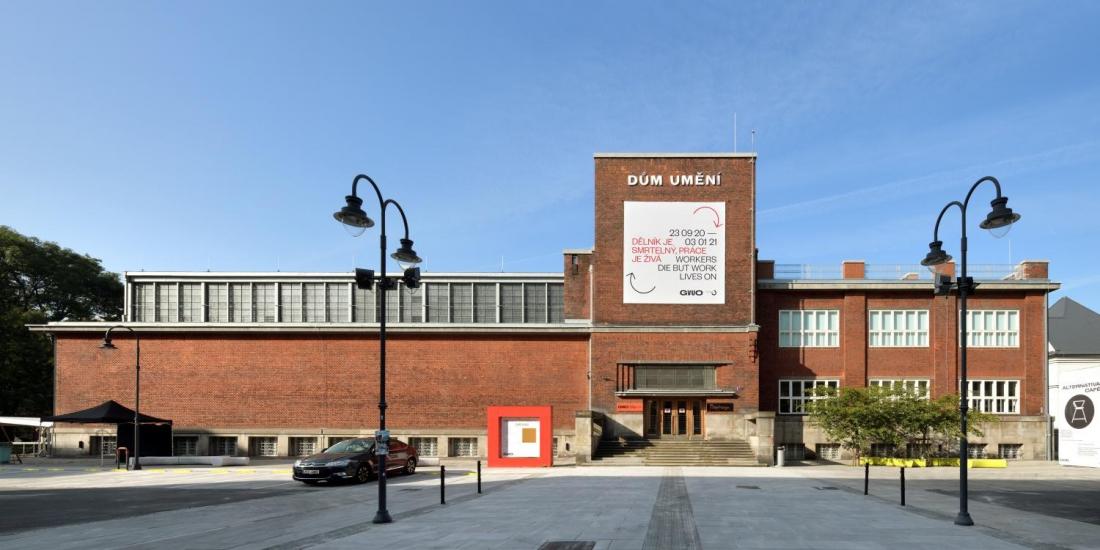 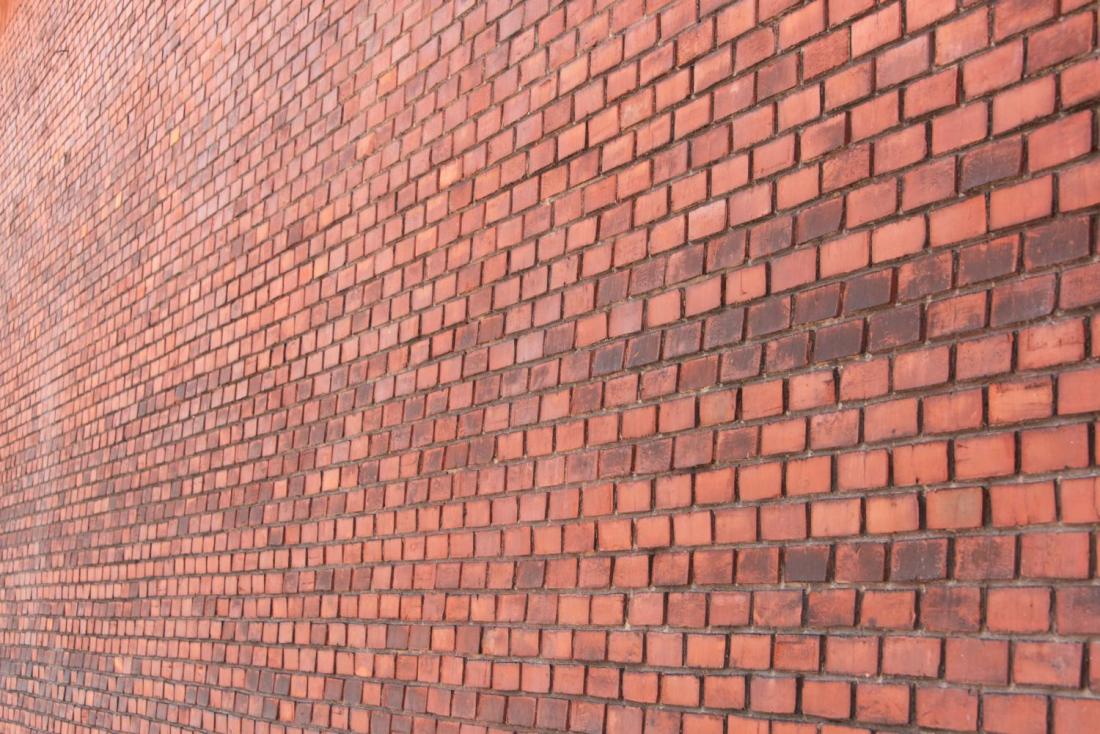 detail of a brick wall 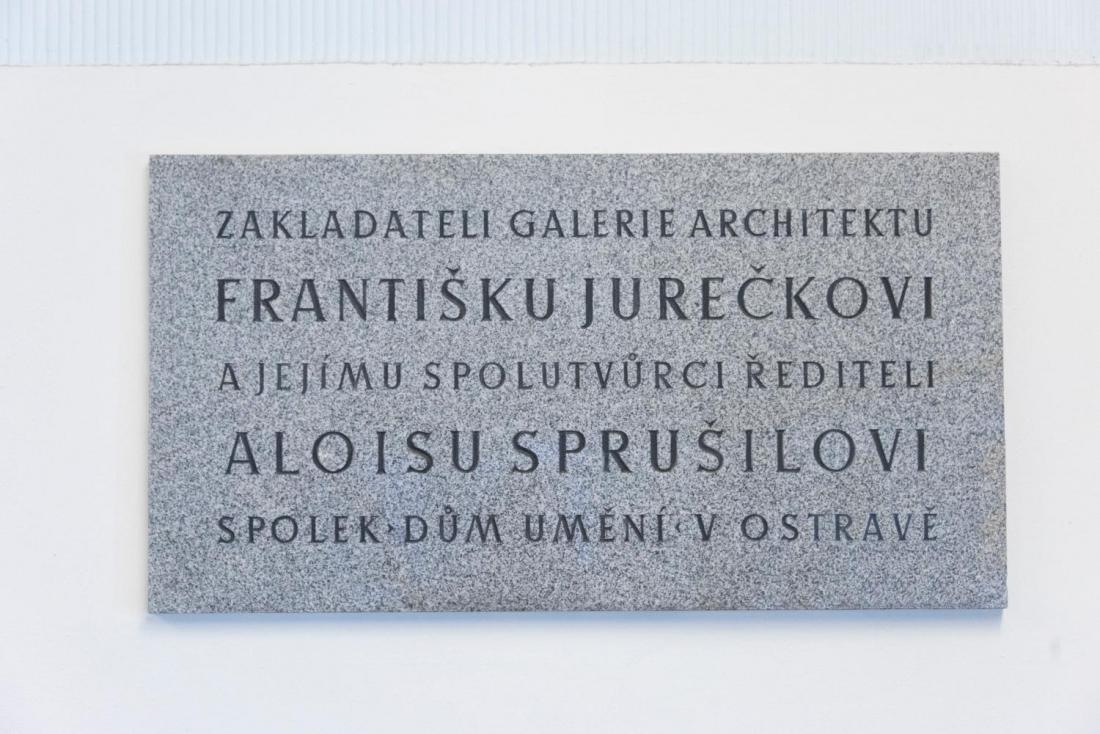 House of Art, GVUO will celebrate 95 years of its existence this year. We are happy to present you the story of our beautiful exhibition building. We will celebrate the anniversary of the House of Art throughout the year with exhibitions focused on the GVUO collections, such as the exhibitions of VÁCLAV BROŽÍK / Drawings or Spanish artists of the Paris School.

On 24 January 1923 the Association for the Construction and Maintenance of an Exhibition Pavilion in Moravská Ostrava was formed; the association announced a public competition to design a new building for exhibitions, which would take account of the latest international trends in architecture. The competition jury included the prominent art historian and critic Václav Vilém Štech and the architects František Vahala and Bohuslav Fuchs. The jury awarded two second prizes – one to a design by Kamil Roškot, and the other to a design by two Prague-based architects, František Fiala and Vladimír Wallenfels. The latter design formed the basis for the construction project, supervised by the building contractor Rudolf Kaulich; the opening ceremony took place on 13 May 1926. Fiala and Wallenfels were students of Jan Kotěra and Josef Gočár, and they created a modern structure whose purist aesthetic was accentuated by the large, plain surfaces of the red brick facades. The building was unique among its contemporaries in incorporating skylights – roof windows which allowed natural light to enter the main exhibition spaces. The House of Art has undergone several technical and functional alterations enabling it to meet modern needs, but the original structure has been preserved largely intact.
It was to house a permanent exhibition based on František Jureček’s gallery collection, as well as showcasing contemporary art, providing a forum for artists to meet and collaborate, and playing a valuable role in educating the general public about art. The project eventually became a reality largely thanks to the joint efforts of František Jureček (an Ostrava building contractor and art collector) and the gallery’s first director Alois Sprušil, who played a crucial role in developing the legacy left by Jureček during the inter-war period.

FRANTIŠEK JUREČEK (1868–1925)
The Ostrava building contractor František Jureček is closely associated with the origins of the city’s Gallery of Fine Arts. He was the spiritual father of the Exhibition Pavilion – now known as the House of Art (Dům umění). Sadly, he did not live to see the opening ceremony (he died on 5 October 1925). However, before his death he donated a large part of his own private art collection to the gallery – an act of such generosity that the gallery’s director Alois Sprušil decided to display the works permanently, naming the gallery after Jureček himself. The collection represented a valuable cross-section of Czech art which included three 18th-century pieces (Grund), 27 important works from the 19th century (Brožík, Havránek, Chittussi, Machek, Mánes, Navrátil, Purkyně, Ullik, Uprka, Věšín) plus several works of lesser importance (or disputed authorship), several paintings from the early 20th century (Slavíček, Hudeček), and a group of very fine drawings (Aleš, Jenewein, Marold, Preisler, Schwaiger, Švabinský). Jureček’s generous gift made an invaluable contribution to Ostrava’s Gallery of Fine Arts in its early years; now the gallery’s collections include over 23 000 items.

ALOIS SPRUŠIL (1872–1946)
Alois Sprušil was the driving force behind Ostrava’s art scene during the period when the House of Art (Dům umění) came into existence. He was a founding member of the Association for the Construction and Maintenance of an Exhibition Pavilion in Moravská Ostrava, an organization that was set up to promote the construction of the city’s new gallery. Sprušil coordinated Ostrava’s art scene, presented the works of Czech artists to the general public, invited Prague-based artists to Ostrava, and organized exhibitions of works for sale. He was a tireless promoter of art, and the fulcrum of Ostrava’s artistic life. When the House of Art was opened (13 May 1926), Sprušil was appointed as the gallery’s director – an unpaid, honorary position to which he brought his unparallelled energy and passion. Besides giving lectures and guided tours for visitors, he also acquired numerous valuable works for the gallery. Building on Jureček’s legacy, he enlarged the original collection from 120 to 2100 items. The Ostrava City Archives contain extensive correspondence between Sprušil and many famous Czech artists, inviting them to exhibit their works in Ostrava. It is clear from these letters that Sprušil was more than just a friend to these artists; he was a highly respected figure, and his efforts were much appreciated by the entire artistic community. He also played a crucial role during the Nazi occupation, helping to ensure that the House of Art remained under Czech management. At the end of the war (assisted by Eduard Šebela, the director of a local coal mining company) he removed the collections from the gallery to protect them from bombing, placing the works into temporary storage at a church in Kunčice pod Ondřejníkem.  Alois Sprušil died on 2 November 1946. His funeral procession began at his beloved House of Art, to which he had devoted so much of his life.